Spacemakeplace is celebrating five years since the installation of ‘Whereness’. Located near the Langara /49th Avenue Canada Line Station, ‘Whereness’ was commissioned by Mosaic Homes for the City of Vancouver Public Art Program in 2016.

‘Whereness’ provides a tactile link between the area’s geological past and its current condition. The bottom boulder of the sculpture is a granite glacial erratic, deposited at this address thousands of years ago as a huge ice sheet receded up the Fraser Valley. This very boulder was scanned and replicated six times, then stacked to form a visual puzzle.

The sculpture acknowledges the practice of piling rocks at certain points along pathways to guide travellers crossing the landscape. This simple custom is still common across cultures around the world.

WHERENESS, located at Cambie & 50th, Vancouver.  More here.  Happy to announce that the new public artwork ‘Whereness’ was successfully installed at the Cambria site in early August 2016.  Landscaping at base coming soon.

Five thousand years ago a huge glacier, a mile thick covered what is now Vancouver, BC.

As this massive ice sheet flowed down the Fraser Valley and across the Lower Mainland, it pushed and crushed mountains of rock in its path.  When the giant ice sheet receded back up into the mountains at the end of the last Ice Age it deposited millions of large boulders in its wake.

These glacial erratics remain scattered all over Vancouver, usually buried below the city. As Vancouver grows and the land is developed and redeveloped these ancient boulders are exposed by excavation and removed, once again setting them in motion. 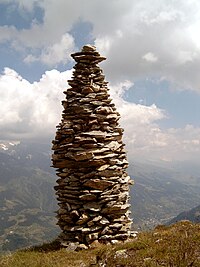